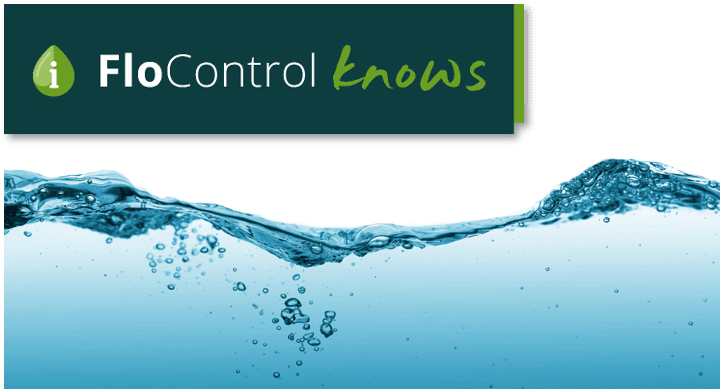 DOES BG29/2021 IMPACT ON THE SYSTEM DESIGN & FLUSHING OPERATIONS OF FCU CIRCUITS?

System contaminates and debris will inevitably be found in newly fabricated heating and cooling pipework systems. If allowed to remain in the system in sufficient quantity the system will be prone to blockage at the strainers, control valves and the small bore FCU coil. They may also initiate corrosion and encourage the growth of microorganisms.

The subject of cleaning pipework systems to remove contaminants prior to commissioning was first addressed in 1991 in the BSRIA application guide AG8/91 Pre-Commissioning Cleaning of Water Systems. Experience has shown that systems that are designed and cleaned following this guidance are less likely to suffer operating problems. The next two updates AG1/2001 and AG1/2001.1 included feedback from the industry, covered bacteria related issues, Pseudomonas-like bacteria in particular, that had become a common problem in the 90s and an entirely new section dedicated to adding new pipework to an existing system as this process had proven to bear a serious contamination risk.

In 2011 the application guide was renamed BG29/2011 and incorporated more industry feedback as well as roles and responsibilities of, and guidelines for consistent communication between parties involved in system cleaning & flushing. In 2011, the design & flushing process for FCU circuits was still based on a constant flow pump strategy, with a 4-Port valve on the FCU and a DRV in the return. The system was designed for back flushing the FCU, with a flushing bypass installed upstream of the coil, control and regulating valves, to exclude the FCU from chemical cleaning and a drain valve in the flow to the terminal unit facilitating back flushing of the unit.

The next edition BG29/2012 included European and British standards, and for the first time a variable flow pump strategy with PICVs and a 4-Port and Constant Flow Valve on the end-of-line terminal unit, referencing the energy saving potential of variable flow systems, as explained in BG12/2011 “Energy Efficient Pumping Systems”. The recommended back flushing process remained unchanged but problems were anticipated when back-flushing the terminal unit due to the small orifice of the PICV. Therefore a secondary design was included, recommending the installation of a drain valve between coil and PICV enabling forward flushing of the coil at full velocity without the flow passing through the PICV. 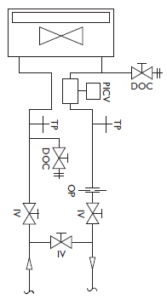 However, the 6th edition BG29/2020 published in May 2020 was a major departure from the BG29/2012 version. The system design was optimised for the energy-saving variable flow strategy, completely PICV controlled, including the end of line FCU. In the 2020 design the drain valve in the flow was removed, promoting forward flushing through the FCU as the most effective  flushing method.

Furthermore, the design was changed from the previously recommended 4 Port/constant flow valve on the end-of-line FCU to fully PICV-controlled. The end-of-line FCU is now designed with a PICV, with an additional PICV with temperature sensors in the return of the branch. The branch PICV only reacts when the sensed temperature in the pipe drops below its setpoint value. This doesn’t impact on flushing the FCU branch other than that the end of line PICV must be isolatable and demountable for flushing.

The short answer to that question is: None. Our comparison of the latest version BG29/2021 amended 6th edition to the previous one (BG29/2020) shows some minor iterations and slight amendments, which do not affect FCU circuits from a design/valve configuration or flushing perspective.

Why does the flushing direction matter?

The flushing direction as such is not important. The ability to flush the Fan Coil Unit at full velocity however, is extremely important to maintain the water quality in the system. As stated in the opening paragraph, poor water quality can lead to the growth of microorganisms, corrosion and blockage of essential component parts, which ultimately would lead to compromised occupant comfort and higher energy consumption as well as costly maintenance and repairs.

How does the BG29 Application Guide impact on the fan coil valve package?

FloControl Ltd. has supplied the UK building services market for over 10 years with valve set assemblies for FCU circuits. FloControl works closely with Fan Coil Unit manufacturers as well as ME consultants, contractors and commissioning engineers. Taking into consideration the experience gained over the past 10 years as well as the recommendations from the BG29 Application Guide, we believe that the key points for a successful fan coil valve package are:

Let’s run through these key points in detail.

1. A clear path for flushing at full velocity

Fan coil unit valve configuration requirements may vary by FCU manufacturer or project, taking into account specific conditions such as limited space. While the BG29 compliant configuration allows for a clear path to forward flush the FCU at high velocity, we also see in the market a slightly more compact configuration, featuring the metering station in the flow, which will restrict the flushing velocity. This approach is widely practiced in the UK without any recorded adverse impact on the coil  or energy consumption. 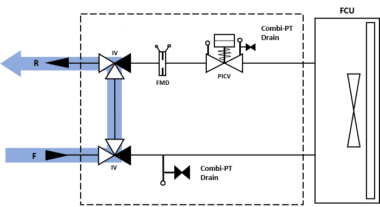 When using a flushing bypass it is essential that the bypass has a full bore large enough to accommodate system flushing velocities. 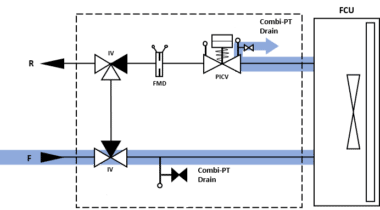 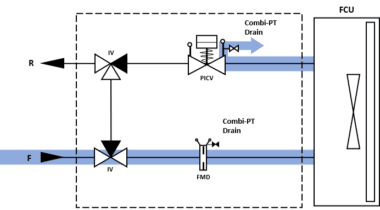 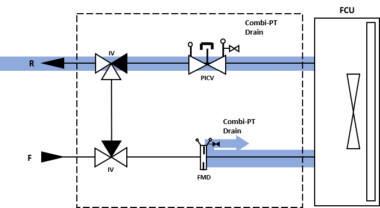 If you want to use the most compact fan coil unit valve set it is recommended to choose a PICV with removable insert. During FCU flushing the PICV insert can be replaced with a blank cap, clearing the path for a full velocity FCU flush.

2. Flexibility to forward and backward flush

The PICV should never be back-flushed at flushing velocity. However, to clear the water between the bypass and the PICV in the return branch, the bypass back drain option remains necessary. 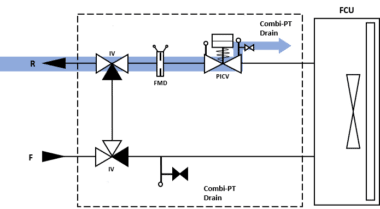 3. Ability to isolate the FCU

The BG29/20 & 21 designs recommend 3 isolating valves to achieve maximum flexibility to bypass, isolate, back or forward flush the coil or allow for full flow. This is not practical when fitting a fan coil unit valve arrangement directly onto a FCU with the flow and return pipework on 40mm centres. A special bypass valve incorporating two 3-way ball valves is recommended.

4. Flexibility to drain the flow and/or return connection of the FCU

While the BG29/20 and 21 schematic for FCUs doesn’t show a drain in the flow any longer, we recommend installing a Drain and PT Plug, which is available as a dual-function in component. In a vertically configured valve assembly the drain can be useful to drain the FCU through the low positioned drain rather than opening a union connection. A more complete, less messy solution at a negligible incremental cost!

5. Ability to vent at the FCU

BG29/20 & 21 as well as the previous application guidelines are consistently recommending to include air vents at high points to release air during system filling. When the FCUs are located at the highest point, it is advisable to consider an air vent on each coil. We are recommending inclusion of either a union drain valve, which is useful for filling the system and venting or an automatic air vent for automatic venting at the high point of the flushing bypass. 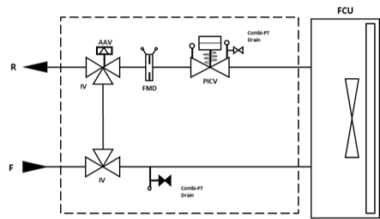 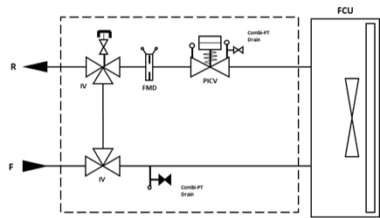 6. Versatility to cope with a multitude of FCU designs

Besides BG29, there are other factors to consider when selecting an FCU Valve assembly.
Union connections on all joints allow for easy valve and components alignment and removal.
Horizontal & vertical alignment options to cope with OEM’s requirements.
A compact design that fits over the FCU drip tray to avoid incremental cost for insulation.
Consider the use of a PICV with removable insert. This may be useful for flushing the return connection on the FCU. The removable insert can be replaced with a blank cap during flushing operations and will be returned afterwards. It will certainly be helpful for flushing the branch when using a PICV as end-of-line solution as the insert can simply be removed instead of the entire valve.

While BG29/2021 hasn’t impacted on the system design and flushing operations of FCU circuits, its predecessor BG29/20 has influenced the industry standard. By ensuring we keep the system as clean as possible through high velocity flushing operations, a contribution will be made to reduce the energy use of the installation and to lower the maintenance costs.

We use cookies on our website to give you the most relevant experience by remembering your preferences and repeat visits. By clicking “Accept All”, you consent to the use of ALL the cookies. However, you may visit "Cookie Settings" to provide a controlled consent.
Cookie SettingsAccept All
Manage consent

This website uses cookies to improve your experience while you navigate through the website. Out of these, the cookies that are categorized as necessary are stored on your browser as they are essential for the working of basic functionalities of the website. We also use third-party cookies that help us analyze and understand how you use this website. These cookies will be stored in your browser only with your consent. You also have the option to opt-out of these cookies. But opting out of some of these cookies may affect your browsing experience.
Necessary Always Enabled
Necessary cookies are absolutely essential for the website to function properly. These cookies ensure basic functionalities and security features of the website, anonymously.
Functional
Functional cookies help to perform certain functionalities like sharing the content of the website on social media platforms, collect feedbacks, and other third-party features.
Performance
Performance cookies are used to understand and analyze the key performance indexes of the website which helps in delivering a better user experience for the visitors.
Analytics
Analytical cookies are used to understand how visitors interact with the website. These cookies help provide information on metrics the number of visitors, bounce rate, traffic source, etc.
Advertisement
Advertisement cookies are used to provide visitors with relevant ads and marketing campaigns. These cookies track visitors across websites and collect information to provide customized ads.
Others
Other uncategorized cookies are those that are being analyzed and have not been classified into a category as yet.
SAVE & ACCEPT
Powered by